Graduate students in the School of Social Work conducted a study to better understand the pervasiveness, causes, and consequences of housing insecurity in Keokuk.

The City of Keokuk, located in the southeastern most tip of Iowa at the confluence of the Des Moines River and the Mississippi River, was once a boom town for manufacturing and industry.  Like many rural communities, the changing economic landscape and shifting demographics have introduced significant challenges in the community.  Since the 1960’s, the population has shrunk from about 17,000 residents to about 10,700.  Although it remains an economic hub in the tri-state region, several large plant closures and increased automation have left Keokuk poorer, less populated, and less healthy.  The city and its county, Lee County, have the unfortunate distinction of bottom (or close to bottom) ranking in the state across many community wellness indicators, including unemployment, educational attainment, and health outcomes.

City leaders suspect that another symptom of increasing poverty in the community is housing insecurity, broadly discussed as the experience among families and residents of unstable, unsafe, or unaffordable living arrangements.  Homelessness, while maybe hidden from view, also appears to be a growing concern in Keokuk, and some abandoned properties are known to have “squatters”, who are often living in these spaces despite having no running water or electricity.

Keokuk currently has no coordinated effort to systematically address concerns about homelessness and housing insecurity.  Recently, the city has been acquiring and tearing down dilapidated properties, which has been an effective tool for neighborhood stabilization (removing blight, protecting property values, and so on), but may have the unintended consequence of pushing more families into unstable housing situations.

Community leaders recognize the need to coordinate a response to housing insecurity, including strategies that address both property conditions and the needs of individual families.  To begin working toward this goal, Keokuk officials first seek to better understand the scale of the issue, the underlying causes, and the impacts on residents in their community struggling to achieve stable living arrangements.

For this project, students developed methods for gathering data that that will help service providers begin to develop local strategies for intervention.  The team explored how other communities have obtained important data, such as whether analysis of existing datasets might include indicators of housing insecurity, or whether surveying certain segments of the population can produce useful statistics.  The team designed a survey that pulls questions from best practices and that navigates the sensitive nature of the topic, including the impact of COVID-19 on housing and income.  Finally, the team compiled basic research in a series of posters about interventions that might be considered in Keokuk. 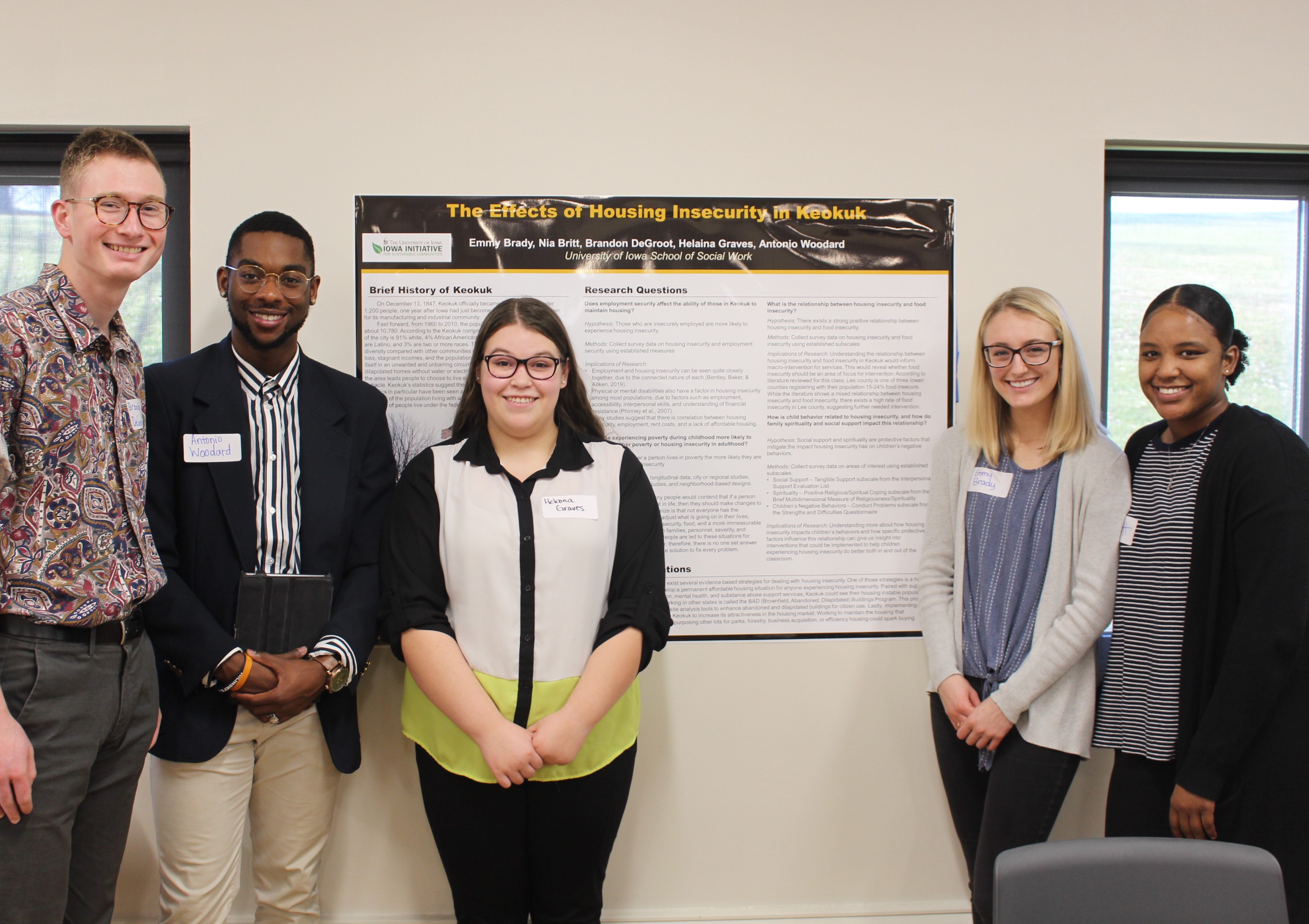