As part of the Planning Sustainable Transportation Course at the University of Iowa School of Urban and Regional Planning, students examined possible design alternatives for Main Street (US Route 218) in downtown Keokuk.

For much of the 20th Century, transportation planners and engineers focused on traffic throughput as a measure of the level of service for urban streets. Though this approach minimizes delay for motorists, it often creates disconnects between streets and their adjacent land uses. This imbalance between the street as a transportation link and the adjoining urban space can pose challenges to a vibrant downtown environment. Such streets also disadvantage other road users, including pedestrians, cyclists, and transit users. In the past few decades, city planners have become increasingly interested in better balanced “complete” streets designs that take the urban context into account. Such designs have been shown to increase safety or non-motorists and motorists alike, as well as providing a more inviting environment for people to gather in downtown spaces, thus promoting economic and social activity often lacking on wide, auto-oriented urban arterial streets.

In addition, cities such as Keokuk that have experienced declining populations often find that traffic volumes on downtown streets have fallen well below the levels that were used to design the streets in the first place. Keokuk’s population peaked at around 16,500 residents during the 1960s, but like many Iowa communities, it saw population decline during the latter half of the 20th century. The current population has stabilized around 10,600 residents.

While the capacity of streets is routinely increased in response to forecasts of future traffic demand, they are not often redesigned to reflect new realities of lower traffic volumes that communities like Keokuk face. This combination of falling traffic volumes and desire to relink adjacent land use to street function makes many urban arterial highways ideal candidates for a rethink of street design, such as “compete street” treatments or “rightsizing”.

However, implementing complete streets designs presents challenges for localities. Major downtown streets are also often designated as state highways, and in these cases final control over design changes may be outside of local jurisdiction. For example, in Iowa, state highways fall under the jurisdiction of the Iowa Department of Transportation. Localities often lack an understanding of what types of technical assistance are available from the state department of transportation or what designs are acceptable.

The purpose of this project was to prepare a report for the City of Keokuk that outlines the possibilities for better connecting city streets that are designated as state highways to their adjacent land uses. The study focused on Main Street, but recommendations are applicable to other local streets as well. This includes the consideration of the function of urban streets for all users – motorists, cyclists, pedestrians and transit users. The project team researched Iowa DOT requirements and recommended possible courses of action, including typical street designs, funding sources, and resources for local decision makers.

The project resulted in a State Highways Study for the City of Keokuk, which identifies and recommends possible treatments for the Main Street (US 218) corridor downtown.  The study includes both general recommendations for context sensitive redesign of the street right of way and identification of specific locations and treatments within downtown Keokuk. The study also provides background on the types of projects that are feasible within current Iowa DOT policy guidelines as well as resources for local officials to interface with Iowa DOT and other entities about design and funding.  The study draws from case studies of successful conversions of similar downtown streets that are designated as US and State highways. 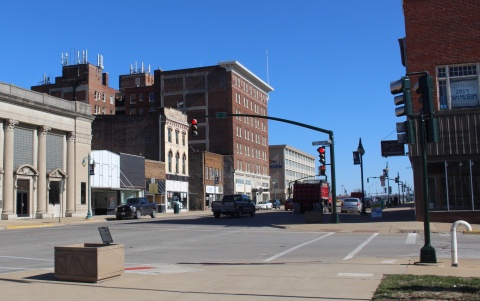