As a part of the 8 Generational Plan: Envisioning Cities course taught in the School of Urban and Regional Planning, a group of 10 UI students will present their long-term visions for Iowa City as America’s Next Great Regenerative City. This collaborative innovation tournament is the culmination of a new course titled “Eight Generational Planning: Envisioning Cities for Year 2228.” The team of judges, led by Iowa City Mayor Throgmorton, includes local elected officials, planners, researchers, and architects.

This course is another UI first: the world’s first undergraduate course on regenerative city planning. The City issued the first Regenerative City Proclamation in 2016. The students responded to this challenge: Design a great distant-future Iowa City that is regenerative, resilient and equitable.  In other words, plan for hope! This involves re-imagining the Iowa City layout, streetscapes, buildings, transportation and food systems, social governance and human interactions, the place of nature in the city and the role of artificial intelligence. 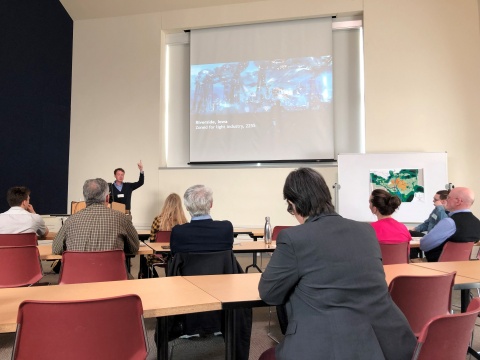