As part of their capstone project, second-year graduate students from the School of Urban & Regional Planning created a plan outlining potential opportunities for conversion of low-traffic residential streets to non-vehicular greenways, in addition to developing bicycle and pedestrian routes, for the city of Keokuk, Iowa.

The City of Keokuk, Iowa, is located in southern Lee County, on bluffs overlooking the Mississippi River. Keokuk’s population peaked at around 16,500 residents during the 1960s, but like many Iowa communities saw population decline during the latter half of the 20th century. The current population has stabilized around 10,600 residents. Keokuk is also known for Lock and Dam No. 19, listed in the National Register of Historic Places.

As city revenues drop due to population loss, the inevitable decline of infrastructure can lead to many issues for residents of a community. Several cities across the United States have begun implementing ‘greenways’ as an alternative to paved roads. These linear parks typically only include a paved surface wide enough for bicyclists and pedestrians. This greatly reduces the required cost of resurfacing the existing streets, and improves neighborhood aesthetics and safety for residents, including children and the elderly.

While new initiatives have already begun to improve Keokuk’s core neighborhoods through stabilizing the housing stock and improving aesthetics, the maintenance of the streets could prove to be the biggest challenge. Platted in the mid-to-late 1800s, these neighborhoods feature a square-block street grid, with an average of 6 homes on each block (12 on both sides). This has proven to be a wasteful use of resources, as the number of homes is greatly mismatched to the amount of street pavement. As a result, the traffic volume on many of these streets is consistently very low. In addition, most of the homes in these neighborhoods have rear garages with alley access, making the streets themselves less necessary.

Partly as a result of this mismatch, Keokuk has struggled to maintain the aging, crumbling street infrastructure in its older residential neighborhoods. Compounding this is a recent EPA mandate for storm and sanitary sewer separation, which has and will continue to strain the city’s already limited fiscal resources. Taking this into consideration, the planning team examined subsurface utility functions, their integration into these new green pathways, how greenway design can lower utility installation and maintenance costs.

The city has also set a priority to enhance and expand sidewalks, trails, and shared routes within the city, with the goal of connecting neighborhoods to downtown and civic destinations while increasing bicycle and pedestrian usage. The planning team created a sidewalks, trails, and routes plan for the city, basing this work off the identification of potential non-vehicular greenways to be included as focal points of the route network. Students focused on strategies to reduce and overcome existing barriers to walking and bicycling, providing safe and accessible connections between neighborhoods and destinations, and encouraging the integration of active transportation into residents’ lifestyles.

In summary, this project examined the feasibility of the implementation of greenways in Keokuk, including legal issues, cost/benefit analysis, and social, environmental, and health impacts. This led to a decision matrix that can be used to determine which specific street segments are most appropriate for conversion. Based on these recommendations, a sidewalks, trails, and routes plan was created, incorporating funding sources, identifications of possible street and/or sidewalk repairs, and public input. 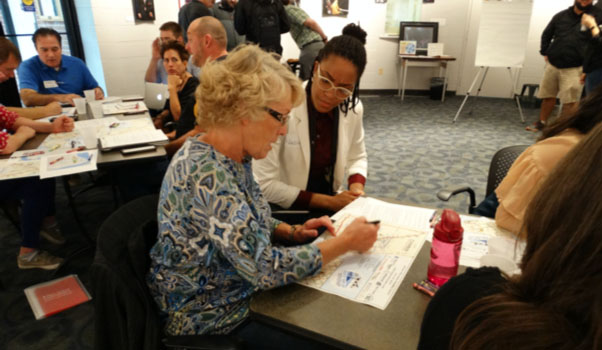