As part of their Senior Design Capstone course, Civil & Environmental Engineering students create designs for redevelopment of the bluff and open space between downtown Keokuk and the Mississippi River, so that the downtown district is better connected with the riverfront.

The Downtown to Riverfront project is a multi-block redevelopment project in Keokuk. The project bounds are Lucas Avenue on the northeast, S 2nd Street on the northwest, Bank Street on the southwest, and the rail lines on the southeast. There is currently a park with an ADA accessible trail, Gateway Park, located on the corner of S 2nd Street and Main Street. On the other side of Highway 136 are private businesses, and south of that a church. On corner of S 2nd Street and Johnson Street is the Keokuk Housing Authority, and within the remainder of that block is Riverview Park. Riverview Park is currently separated by a bluff from the Keokuk Union Depot, which is undergoing many renovations. It serves as a tourist attraction, as evidenced by the volume of private donations to fund said renovations.

The engineering team was tasked with enhancing Riverview Park, and making it and the Union Depot more accessible. The key aspects of this project are two dog parks, one for small and one for large dogs, a parking lot for both Union Depot and park visitors, structures to provide shade, bathrooms, a variety of water fixtures, and trails leading from the Gateway park area, down the bluff to the Union Depot, and connecting all the park amenities. The edge of the bluff is currently littered with trees, blocking the view of the Mississippi River and Union Depot from view of park users. It is desirable that the tree line be cleared, and the team evaluated how that would impact the integrity of the bluff and impact ecosystems in the area.  Structural, ecosystem, and grading analyses were performed by the team prior to the determination of amenity locations.

This project is expected to serve as a draw for community members and tourists alike. While the surrounding housing consists of that of elderly populations, as well as the Keokuk Housing Authority, the park is aimed to serve all ages. To do so, however, the engineering team ensured that safety of the users be held paramount. This was done by ensuring all final grading meets ADA standards. Additionally, lighting was extended from Gateway Park to and throughout Riverview Park. Finally, to enhance the aesthetic appeal of the area, a landscaping plan was created. A major element of the site landscaping is the inclusion of trees that can provide shade to the area. 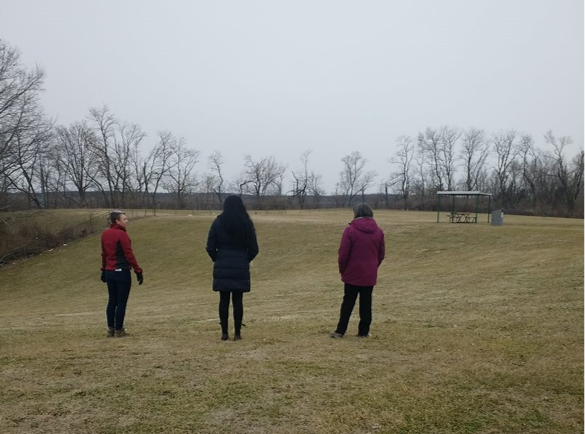