Graduate students in the course Growth Management in the School of Urban & Regional Planning reimagined land use and transportation in an underdeveloped section of North Liberty, with the idea of helping to create a new "Civic Corridor".

North Liberty has for some time envisioned a “Civic Corridor” redevelopment project in the heart of the city, with the intention of creating a pedestrian-friendly mixed-use streetscape on Cherry Street that includes (west to east) the Liberty Center commercial area, Library, Recreation Center, Fire Department, Police Department, City Hall, and the large Penn Meadows park. At the eastern end of this corridor is an existing awkward street arrangement and the potential for redevelopment. Several very conceptual plans have been prepared that focus substantially on the roadway system and improving its functionality, but not as much on land redevelopment potential.

This plan project utilized those concept plans as a starting point to develop an concept that not only improves traffic issues but also provides for a desirable redevelopment environment; examining existing and desirable land use, parcel size and configuration, synergies with existing uses, parking, and other issues. 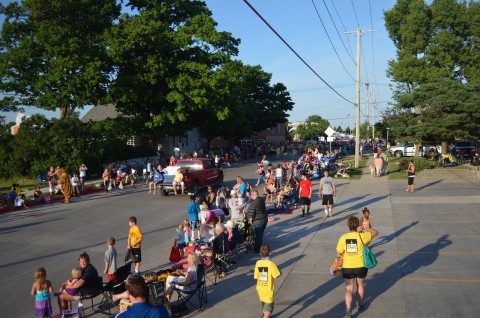